Home / Immigrating to the USA / English as a Second Language / Glossary 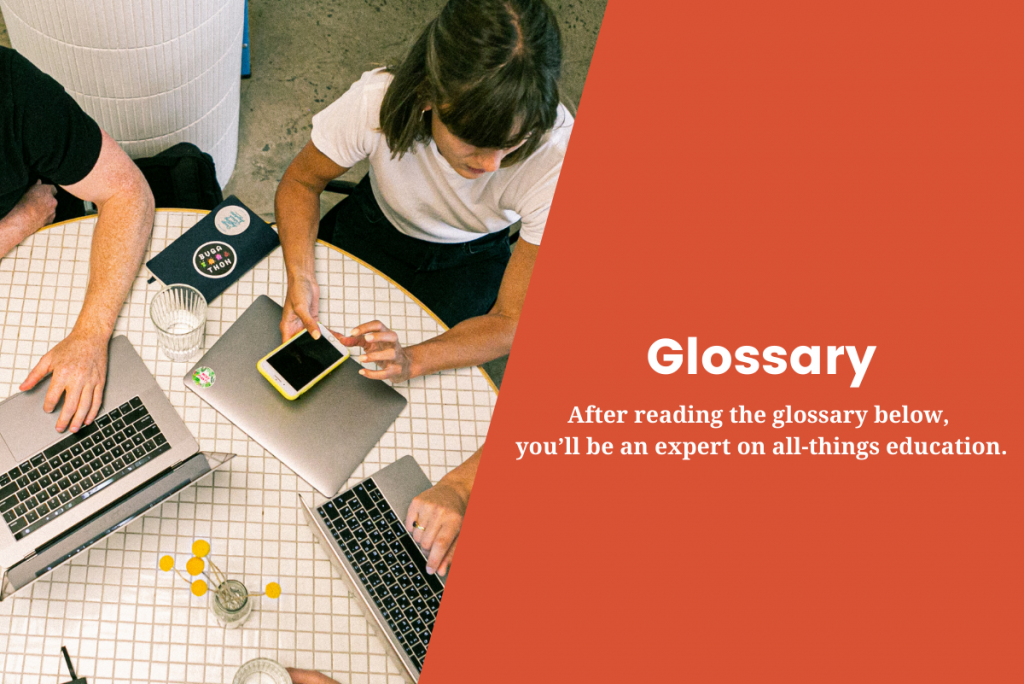 As an international student in the USA, you’ll probably come across a lot of education-related terms that you don’t understand. But after reading the glossary below, you’ll be an expert on all-things education.

Academic Year
The period during which school is in session. The school year typically runs from August through May at most colleges and universities.

Accreditation
A certification by an agency approved by the U.S. Department of Education that shows approval for a school’s educational program and confirms that the school meets a minimal set of standards.

ACT
A standardized test to assess a student’s qualifications for college as part of his or her application. This test is sometimes used instead of the SAT, depending on a school’s requirements.

Alumnus, Alumna, Alumni, Alumnae
Latin terms for graduates of a college or university. Alumnus is singular male, alumna is singular female, alumni is plural male, and alumnae is plural female. Alumnus and alumni are often used in a gender-neutral fashion.

Asset
Item of value, such as a family’s home or business, stocks, bonds, mutual funds, cash, certificates of deposit, bank accounts, trust funds, and other property and investments.

Associate’s Degree
The degree awarded for completion of a two-year program at a community college, trade, or vocational school.

B-2 Visa
A tourist visa. This visa may not be used for studying in the USA.

Bachelor’s Degree
The degree awarded for completion of a four-year undergraduate program at a college or university.

Bursar
The office where students pay their tuition bill.

Campus
A school’s buildings, grounds, and other facilities, all of which collectively comprise its campus.

Class Rank
A student’s standing in secondary school relative to his or her classmates. The rank is reported on either an absolute (2nd in a class of 105) or percentage basis (top 5 percent).

College Board
A nonprofit educational association of colleges, universities, educational systems, and other educational institutions. It also administers the SAT and other tests.

Conditional Admission
Admission to a school under the condition that you meet its requirements for English proficiency after arrival. The school may require you to enroll in English as a Second Language classes.

Cooperative Education
A program where students spend time engaged in employment related to their major in addition to regular classroom study.

Co-signer
The person who assumes responsibility for a loan if the borrower fails to repay it.

Curriculum Vitae (c.v.)
A document similar to an American resume that lists a student’s education, employment, publications, and other activities. This term is usually used in connection with graduate students and faculty, not undergraduate students.

Dependent
A person who receives more than half their financial support from another person, usually a parent or legal guardian. A dependent is generally a child or spouse, but occasionally can be other relatives.

Doctorate
One of several degrees granted by graduate schools, often a PhD.

Early Admission
An application to U.S. colleges or schools prior to the school’s official deadline. Applicants get a response early in the admissions cycle and are required to attend the school if admitted. International students are generally not permitted to apply to early admission programs.

Early Action
An application to U.S. colleges or universities prior to the school’s official deadline. Applicants get a response early in the admissions cycle but are not required to attend a school that admits them.

Eligible Non-Citizen
A non-U.S. citizen who is eligible for federal student aid, such as U.S. permanent residents who are holders of valid green cards, U.S. nationals, holders of form I-94 who have been granted refugee or asylum status, and certain other non-citizens. Non-citizens who hold an F-1 or J-1 visa are not eligible for federal student aid.

F-1 Visa
A visa for students pursuing full-time education in the USA.

Fellowship
A form of financial aid to support a student’s education that does not need to be repaid and is generally provided to graduate students.

Federal Insurance Contribution Act (FICA)
A payroll tax on paychecks to fund Social Security and Medicare. Most international students are exempt from this tax.

Financial Aid
Money provided to students to help pay for their education. Major forms of financial aid include scholarships, grants, and loans.

Interest
An amount charged to the borrower for the privilege of using the lender’s money, usually calculated as a percentage of the principal balance of the loan.

J-1 Visa
A non-immigrant visa for students, teachers, and other exchange visitors.

Loan
A type of financial aid that must be repaid, usually with interest.

Major
The academic area or field of study in which a student’s studies are concentrated.

Master’s Degree
One of several degrees granted by graduate schools.

Need-Blind
A part of the college admissions process where the applicant’s financial situation is disregarded when assessing his or her application. Most schools use this process.

Need-Sensitive
A part of the college admissions process where the applicant’s financial situation is taken into consideration when assessing his or her application.

Non-renewable Award
A scholarship or other financial award that is offered only once.

Postsecondary
Any education past 12th grade.

Principal
The amount of money borrowed or remaining unpaid on a loan. Interest is charged as a percentage of the principal. This is the same word used to define the head of a primary or secondary school, also called a “principal.”

Quarter
A division of the academic year into fourths.

Renewable Award
A scholarship that is awarded for more than one year. Usually the student must maintain certain academic standards to be eligible for subsequent years of the award. Some scholarships may require the student to reapply each year.

Resume
A one-page summary of an individual’s education, employment history, awards, and other accomplishments.

SAT
A standardized test to assess a student’s qualifications for college as part of their application. This test is required by most schools.

Semester
A division of the academic year into spring and fall terms.

Term
Any division of the academic year.

Test of English as a Foreign Language (TOEFL)
A test evaluating a student’s ability to communicate in and understand English. Most colleges and universities require international students to take the TOEFL as part of their application for admission.

Transcript
An official record of a student’s academic work, including a list of courses taken, grades received, and credits awarded.

Trimester
A division of the academic year into thirds, adding a summer term to the fall and spring terms.

Tuition
The fees charged by a school to allow a student to register to take courses at the school.