Should I Choose a Fixed or Variable Rate International Student Loan? 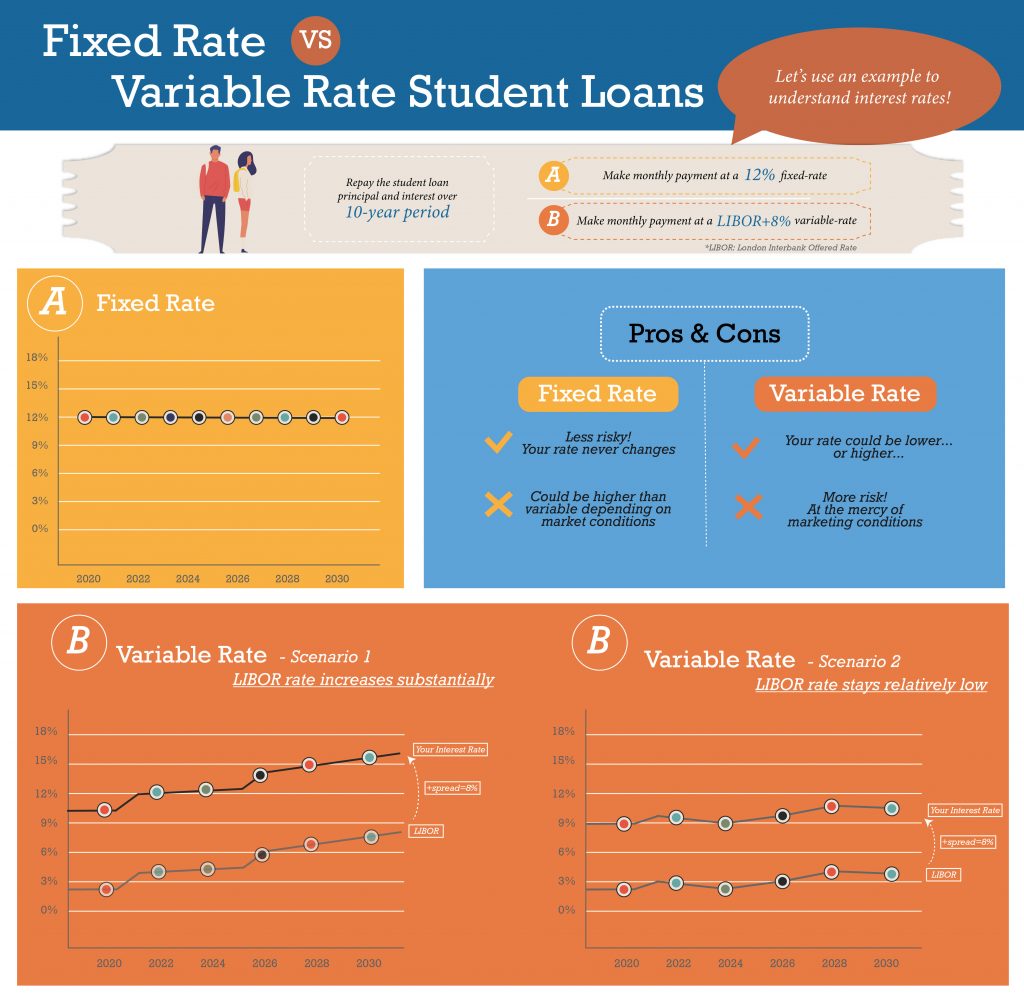 If you’re looking for an international student loan to study in the USA, one of your first considerations is whether to get a fixed or variable rate student loan. But there’s a lot of confusion about the difference between these two types of student loans, and what this means in terms of future payments and financial risk.

The good news is that Edupass has you covered – read on for everything you need to know!

Fixed vs. Variable Interest Rate Student Loans to Study in the USA

Fixed-rate loans are just what they say they are—fixed, which means that your rate never goes up! A fixed interest rate, for example, will simply be quoted as “12%” or “10.5%.”

A variable interest rate is quoted with the benchmark and the spread, e.g., “LIBOR + 8%.” The loan agreement will also specify how often your rate will be adjusted (e.g., every month or every quarter, based on changes to the underlying benchmark rate).

So Which is Better: A Fixed Rate or Variable Rate Student Loan?

The short answer is that it depends on your tolerance for risk. The initial interest rate for variable rate student loans is typically lower than for fixed rates, but if and when market rates spike, the interest rates on these loans can surpass fixed interest rates.

There are three major advantages of a fixed-rate loan over a variable rate loan:

That said, there’s one major advantage for variable rate student loans: if market rates stay low, you may end up paying less for a variable rate loan than for a fixed rate loan.

Of course, if the benchmark goes up sufficiently high, you’ll end up paying significantly more. And if you’re lucky and it goes down, you’ll pay even less than the introductory rate.

Market Trends Suggest Variable Rates Will Rise, But No One Can Say by How Much

No one can say with any certainty whether LIBOR or other benchmark rates will rise. However, Kiplinger’s interest rate forecast stated that “…expectations of the future path of interest rates…showed a gradually rising trend over the next two to three years.”  Historically, LIBOR rates have been very volatile, rising to nearly 11% in 1989.

The Benchmark Rate for Variable Rate Student Loans Is Changing

Another wild card is that U.K. regulators have set a 2021 deadline for financial firms, including banks and investors, to stop using LIBOR. However, there is considerable uncertainty about what benchmark will replace LIBOR, and how this will affect consumers with variable rate loans tied to LIBOR.

How Fixed-Rate International Student Loans to Study in the USA Work: An Example

Let’s say you borrow $30,000, and you repay the student loan principal and interest over a 10-year period, with payments to be made monthly at a 12% fixed interest rate.

Using a student loan repayment calculator or a simple Excel formula, you can calculate that your monthly payment will be $430.31 (assuming interest is calculated on a monthly, not daily, basis). You will pay this same amount every single month for ten years. The only thing that will change is the relative proportion of each payment that is for interest or principal. In the beginning of your loan, a higher percentage of the payment goes towards interest and, in later periods, more of this payment goes towards paying down the principal.

Each month you pay more principal and less interest until your principal balance is zero!

Assuming that you make on-time payments, do not pay off the loan early, and do not receive any lender interest rate discounts, you will pay a total of $51,649.54 over the course of the loan—and this will not change regardless of market conditions!

How Variable-Rate International Student Loans to Study in the USA Work: An Example

Let’s take the same $30,000, 10-year student loan from the fixed-rate example but assume that it’s a variable rate loan with an interest rate of “LIBOR + 8%.”

That means you’ll pay 10% interest initially (because 2% + 8%=10%). The lender calculates the monthly payment as if the rate will stay constant (even though it won’t!), so the initial monthly payment will be $396.45 (assuming interest is calculated monthly, not daily). So for that first month, you’ll save about $34 over what you would have paid to borrow the same amount with a 12% fixed-rate loan (see fixed-rate example above).

If LIBOR rises to 4%, however, your interest rate will rise to 12% (because 4% + 8% = 12%). Now you’re paying the same interest rate as you would in the fixed-rate example above. The lender will then recalculate your monthly payment based on three factors: (a) the new interest rate of 12%, (b) the number of months you have left on your loan, and (c) the amount of principal you still owe.

If LIBOR rises to 8%, your interest rate will rise to 16% (because 8% + 8% = 16%). Let’s say this happens at the end of year 4, so you have 72 months remaining on your loan. Let’s assume that you have $22,106.17 in principal outstanding. (This is the principal that would be outstanding if interest rates rose at a constant 1.5% per year over these four years and the rate was only adjusted at the beginning of each year.) Your new monthly payment would be $479.52, roughly $50 more than you would be paying per month under the fixed-rate scenario above.

On the flip side, let’s say LIBOR rates go down to 1% at the end of year 1, so you have 108 months remaining on your loan and $28,159.74 in principal outstanding. (This is the principal that would be outstanding after making 12 months of $396.45 payments with a 10% interest rate, as described at the beginning of this section.) Your new interest rate would be 9% and your monthly payment would then go down to $381.36…and stay there until rates rise again.

The Bottom Line on Fixed vs. Variable Rates

The bottom line is that only you know if you’re willing to take the risk that your payments will suddenly jump in return for a lower introductory rate.

And remember, fixed vs. variable isn’t the only factor driving a loan’s affordability. Other factors include:

We wish you the best of luck with choosing the right loan product for you!